We’re pleased to announce that the inaugural recipient of our Open Data Pioneer award is V. David Zvenyach. 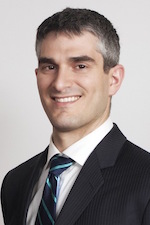 The general counsel for the Washington D.C. Council, Dave is the very ideal of an open data advocate within government. An attorney by training, Dave has learned how to code over the past couple years, and has become a key figure in the world of open legal data and in Washington D.C. open data and civic data.

The story of how Dave came to open data is illustrative. It was just last year that Tom MacWright was frustrated that Washington D.C. made it impossible to get or create an electronic copy of their laws, and a bunch of us made a big, public fuss about how totally unreasonable that it was for Washington D.C. to claim copyright over their laws (thus making it illegal for anybody to reproduce them). It was clear that some civil disobedience was in order, perhaps there’d be a lawsuit, but in the end we’d prevail and the laws would be opened. But instead of having a public brawl, one V. David Zvenyach stepped in. Tom put on a D.C. Code hackathon one Sunday morning, and Dave showed up (again, on a Sunday morning) to announce that a) the D.C. Code was now released under a Creative Commons Zero license and b) that he’d be sticking around for the hackathon and maybe learning to write a little code.

Twenty months later, “learning to write a little code” isn’t really how it turned out. He learned Python. And Node. And Ruby. And Dave dabbles fearlessly in anything else he might need to know. He started creating new services just for fun, becoming comfortable with Heroku and AWS. All while continuing his normal workload (looking at his Git commits, that’s because he’s done a lot of that work on nights and weekends).

That’s just a sample—a list of his projects is available on his website. All of these software projects are done right—they’re committed to GitHub from the first line of code, they consume their own APIs, they’re published under open licenses.

Beyond his coding, Dave does a great deal of behind-the-scenes work to advance the cause of open data, both within D.C. government and federal government. He understands how government works, he understands the needs and desires of the private-sector open data world, and his work as a bridge between the two is vital.

There are a lot of people, all across the country, doing brilliant, vital work in the real of open data. But, in 2014, nobody has done more pioneering work, or established a better model for a bureaucrat-coder, than Dave Zvenyach.

In recognition of Dave’s work, we’re sending him a handsomely engraved Jefferson cup and a $250 credit on Amazon Web Services, his platform of choice. (We tried to buy that credit from Amazon, but it turns out that it’s impossible. We’re grateful to Ariel Gold of the AWS Open Data team and Amazon for solving this problem by simply giving Dave a $250 AWS credit!)